Day 29.  April 23, 2011
I’m sitting in the second row of a church I don’t belong to and the entire service was in Spanish.  I’m not fluent in Spanish—I can understand roughly every third word—if it’s spoken slowly.

I wondered if there’d be a way to use the Dale Carnegie principles.  I wasn’t sure how I could—since I don’t speak the language.  I decided to turn on my other senses.  I observed with my eyes.

There was a woman invited to speak—she had long dark hair—she was wearing a black blouse with a pretty turquoise skirt.  She approached the pulpit and from what I gathered—she said she was nervous about speaking in front of us.  She started out a bit soft spoken.

I immediately connected with her—thinking she looks confident enough—I would never sense she was nervous.  From what I could piece together—she had been away from the church but having returned she found peace.  One of the parishioners turned on a CD with instrumental music—and this soft spoken woman who said she was nervous— began to sing.

And oh how she sang!  She belted it out with all her passion and might.  That spot right between the eyes above the bridge of the nose—wrinkled as she sang.  I could completely relate to that feeling and look—because I sing with all my heart too.  (granted, unlike her, I have ZERO singing skills). 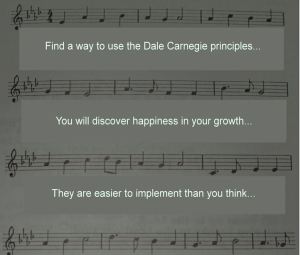 My interpretation of what woman sang...

It was a moving experience.  Despite being nervous she did what she set out to do and she gave it her best—which was a wonderful gift to the audience.

Afterwards there was a reception and I happened to be standing next to her.  I turned to her—not certain if she spoke English but I said—you sang beautifully!  She smiled and said, “thank you.”

The Dale Carnegie principle I used is from How to Win Friends and Influence People:
Principle 2.  Give honest, sincere appreciation.

If you find yourself out of your element—use it as an opportunity to grow.  Open your eyes, your heart and your mind to learn from these experiences because that’s how they become more meaningful.  Even though I didn’t understand most of what was going on in the service I observed courage in another person and I had the opportunity to show her my appreciation.  It was a wonderful way to spend my evening!  When you are willing to take a chance and grow you will discover nothing will hold you back and life becomes more interesting.